In this lecture, Bishop Nevares examines the life of St. Juan Diego. 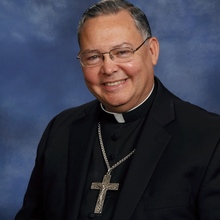 The Most Reverend Eduardo Alanis Nevares was ordained as the first Auxiliary Bishop for the Diocese of Phoenix on July 19, 2010, at St. Thomas Aquinas Parish in Avondale. He began his priesthood as a Missionary of Our Lady of La Salette on July 18, 1981, and was later incardinated into the Diocese of Tyler, Texas, in May 2007.  Prior to his arrival in Phoenix he served as Vice Rector of the Pontifical College Josephinum in Columbus, Ohio, after serving as the Co-Director of Vocations in the Diocese of Tyler, Texas, from 2002 until 2008. Before serving in Tyler, he was the Pastor of St. Patrick Parish in Lufkin, Texas. For 25 years, Bishop Nevares served as a Missionary of Our Lady of La Salette before he sought incardination to the Diocese of Tyler.
Enroll Free